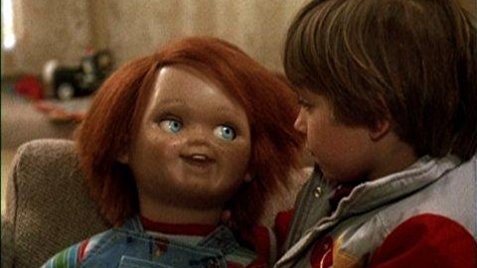 As today is Halloween I thought it only appropriate to look back at some of the films I 'enjoyed' as a child!  These were often referred to as Video Nasties and were usually only available to rent on Cassette from the local video shop!  Video Rental shops used to be a common sight on every high street.  But with the advent of downloads and online streaming services, they all but vanished.

What can I say about this absolute legend of a film!  It broke all the rules as it was disgusting, hilarious and still managed to make us jump!  Plot wise - in a nutshell a group of teens (probably closer to middle age) go on a trip to cabin in the woods, the basement suddenly opens and of course they go and explore and find an old, creepy book, The Book of the Dead!  With it, there is an audio tape of an incantation which, of course, suprise suprise, they play!  One by one they become flesh posessing demons until only one survives to make it to morning!

Now I have the fondest memories of watching this film at my friend’s house!  It terrified us so much so that we were forced to go to the loo in pairs!  Set in Chicago, the film follows a cop and a reptile expert as they attempt to track down a giant man-eating, murderous alligator from the sewers, an unwanted pet, flushed down the toilet many years before! - (Hence the need to pee in pairs, holding hands ready to pull each other off the seat if the alligator returned to bite our bums!)

Probably one of the greatest horror movies ever made and debuting Johnny Depp no less!  This slasher film focuses on four teenagers who are invaded and killed in their dreams by a deformed, burnt killer with a bladed glove!  The battle between fantasy and reality ensues!

The original is probably the best of this sequence of films! Strange and creepy happenings cause havoc on this average Californian family.  Ghosts commune with them through the television, friendly and playful at first until the spirits take on an unexpected menacing turn for the worse.  When the youngest girl is abducted via the TV, the family turn to a parapsychologist and eventually an exorcist  for help.  If you haven't already seen it then I urge you to watch this!

If a house looks too good to be true then it probably is!  Newlyweds move into their Dream Home, a huge house, on sale for an excellent price!  Did nobody tell them that a mass murder had taken place there?  Of course they did but the family bought it anyway!  Can houses have memory?  They call upon the family priest, Father Delaney, who believes the house is haunted and performs an exorcism. Satanic forces cause him to become blind and make him sick. With the help of another priest, Father Bolen and a police detective, the family face the fears of the house.  Watch out for the head-spinning scene, once terrifying, now absolutely hilarious and parodied many times!

Sexual deviant Frank clumsily opens a portal to hell when he tinkers with a box he bought while abroad. The act unleashes gruesome beings called Cenobites, who tear Frank's body apart. When Frank's brother and his wife, move into Frank's old house, they accidentally bring what is left of  Frank back to life with a drop of human blood. Frank then convinces Julia, his one-time lover, to lure men back to the house as human sacrifices, so he can use their blood to reconstruct  himself.

7. Friday The 13th 1980 Another American slasher film, and once again, the story of a foolish group of teenagers, murdered one by one as they explore a long abandoned summer camp, Crystal Lake!  Packed with graphic violence it was great, in the 1980's, perhaps not so graphic now though! Perhaps give this one a miss!

Was this really 1978?  Oh dear, oh dear!  In a nutshell, six year old Michael Myers murders his 17 year old sister.  Sentenced and imprisoned for 15 years, he escapes on route to a court hearing.  The 21 year old Michael steals a car and escapes, to return to his quiet home town to look for his next victims! You can guess the rest!

Why I have listed this as number 9 I have no idea! Purely the fact that the wonderful Rik Mayall is in the pub scene at "The Slaughtered Lamb" should make it number one!  Two American students are attacked by a werewolf whilst backpacking around England!  Whilst one survives the attack the other is brutally killed. As David, (the lucky one) heals hospital, he is plagued by violent nightmares of his mutilated friend, who warns David that he is becoming a werewolf. When David discovers the horrible truth, he contemplates committing suicide before the next full moon causes him to transform from man to murderous beast.  Watching this is a must!

Once again this shouldn't really be at number 10 as it is still one of my favourite go-to bad, bad movies!  In a nutshell, if you don't already know the storyline of this infamous ginger doll, then here goes!  A dying murderer uses black magic to hide his soul inside a children's doll that goes by the name of Chucky!  Said doll is bought for a young boy, Andy, who watches on as Chucky kills his babysitter. The realisation dawns that the doll is alive!  To save his own soul the doll turns on Andy as he becomes his next victim! I could watch this again and again, and have thoroughly enjoyed the sequels including Bride of Chucky!

So, on this final day of October, settle down and download your favourite for a horrible film from your past!

Have I missed any out? Probably but Gremlins and Ghostbusters were more comedy than horror!

Previous Post Ten things I did in the 1970s that I would never let my Kids do!
Next Post My top ten Best and Worst Telly Adverts...probably!
0 items in your cart